Making a Treasure Cover for the Beowulf Codex

A couple of  years ago I commissioned Alex Summers of Red Swan Books, a wonderful  craftsman, to make me a new “manuscript” of Beowulf. I took delivery in  spring of 2018 at TORM. 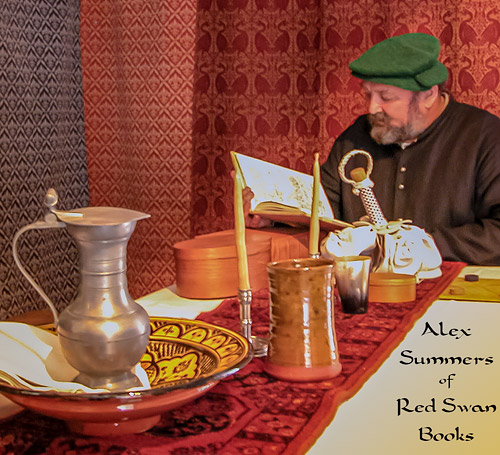 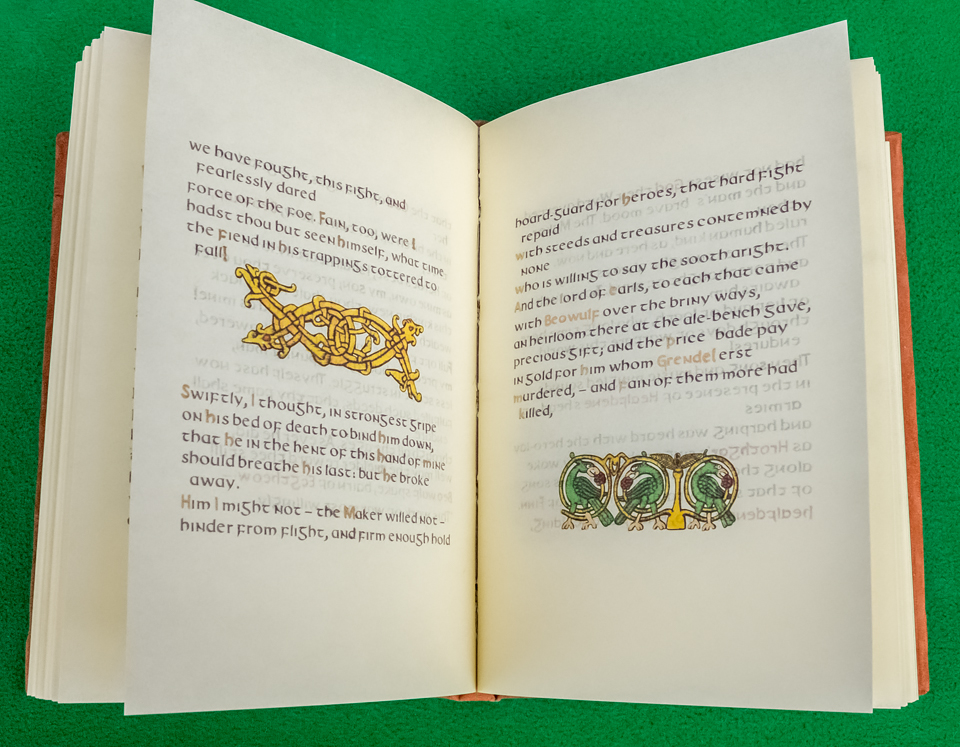 As I expected it was a magnificent copy, in modern English for usefulness today and using a very convincing vellum substitute. 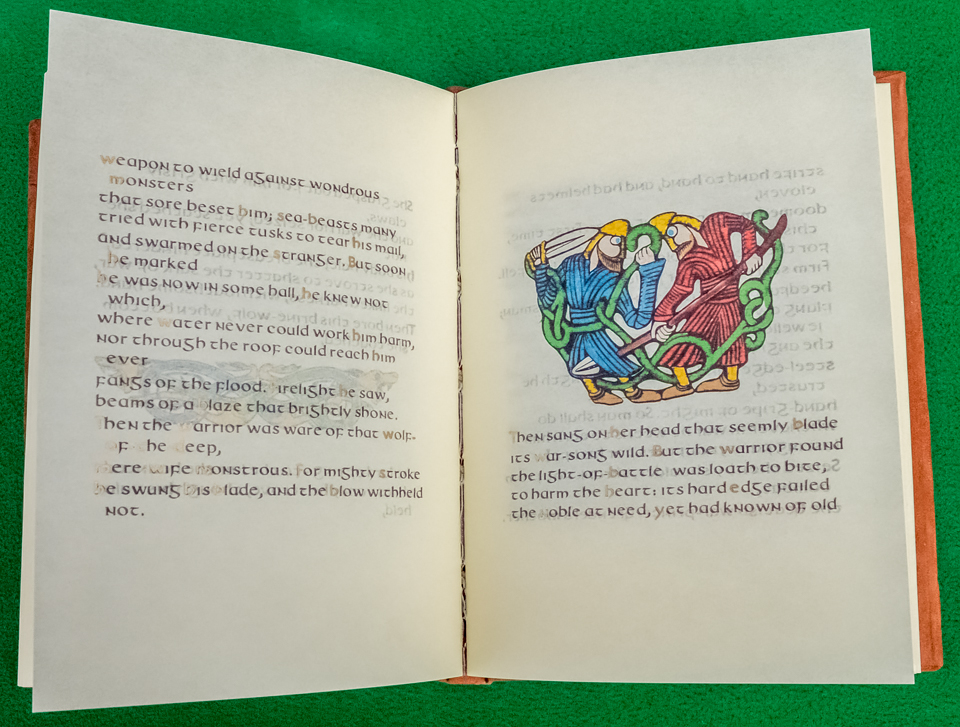 It is entirely hand finished with period pigments, including gold, and properly bound by Alex as well. Strictly speaking ”manuscript“ usually refers to something entirely hand written although it has stretched to include typewritten.  This is partially printed but many of the letters and all of the illuminations are hand painted. It took me a while to think what else to call it until I remembered the word “Codex” which is an ancient word referring to what we would now call a book.

The  intention has always been to decorate the cover in the style of the great treasure books of the period and for that I had been collecting bronze mounts in the intervening period. 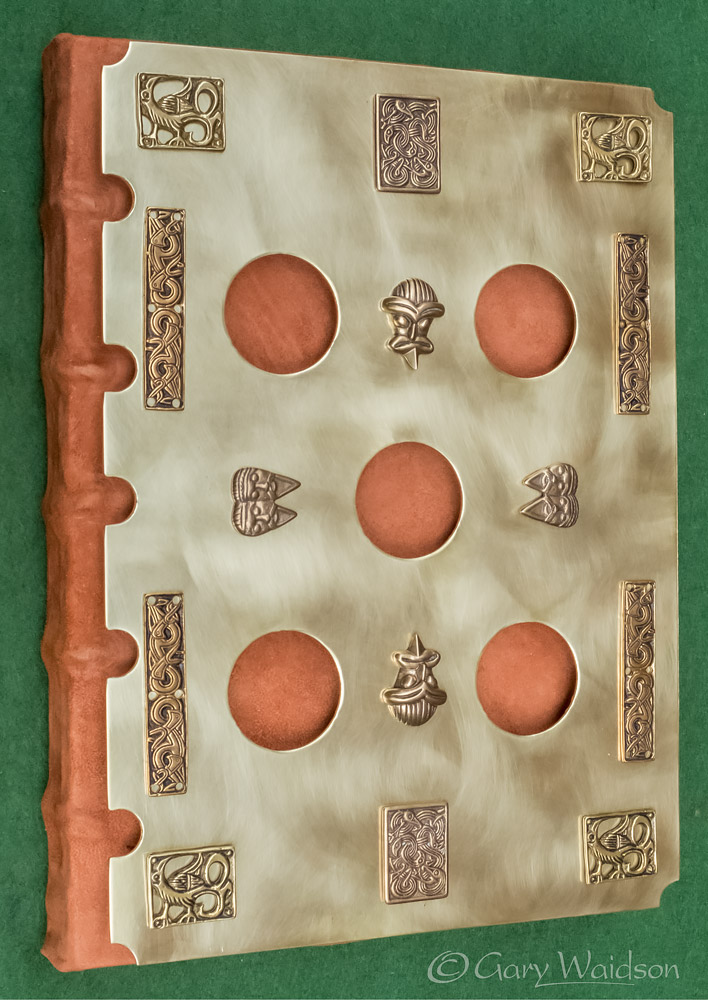 When the book arrived I was able to start preparations for the work to follow.

The mounts  are to be set onto a plate of brass which will then be attached to the book cover. The drilling and punching of the necessary holes was done in the workshop ahead of taking it to the Heysham Viking Festival where I would be working on it as part of my living history display. 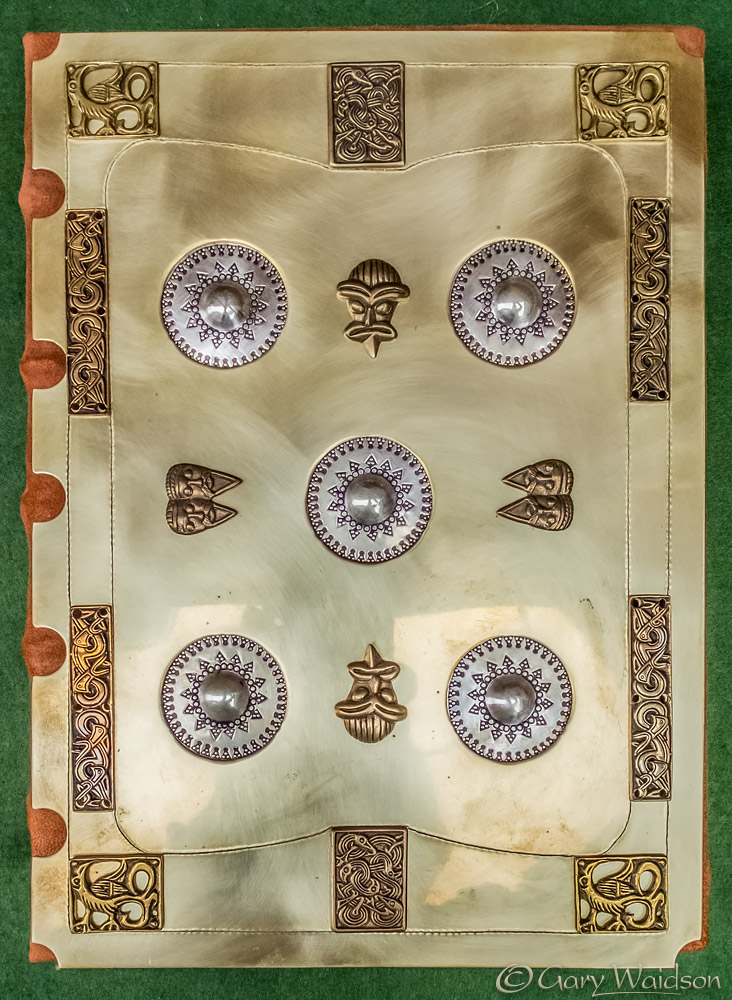 Unsurprisingly I did not get a huge amount of work done at the show while interacting with the public but it is that interaction that is important when putting on a show.

I did get the silver intaglios done and the basic layout marked up though.

I posted earlier about leaving one of Britain’s largest Viking Societies because of their attitude about wearing glasses while demonstrating to the public.

Fine craft work like this is just the sort of thing I now require visual support to achieve and as a result it is the sort of living history that the public rarely gets to see.

The display was hugely popular over the weekend and I spent much of my time explaining how and what I was doing and about the codex itself.  Exactly the kind of educational display I try to provide. 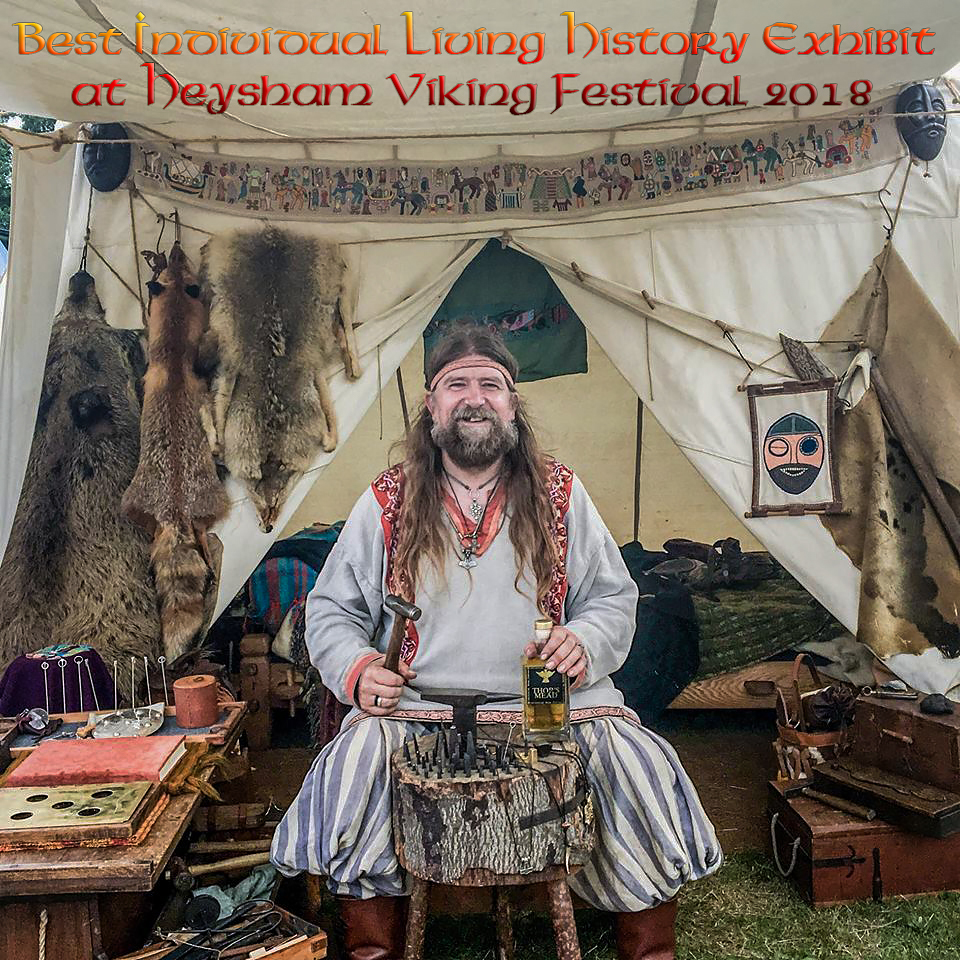 In fact it was so popular that I also managed to pick up the award for the “Best individual living  history display”, which was judged by a secret family group over the  course of the weekend, so I guess I must have been doing something right even if I did happen to be wearing glasses.   ( I also needs glasses for my prize as you can see.) 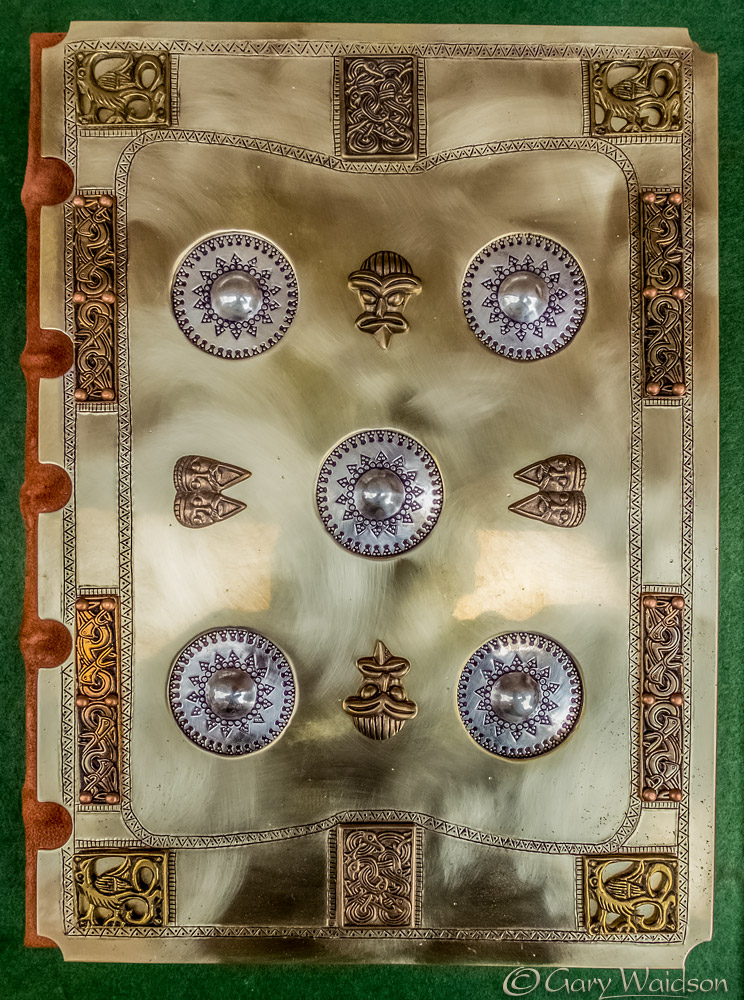 Back in the workshop I was able to work faster of course. A couple of  days later I had laid out the divisions properly with a dotted chevron  pattern. 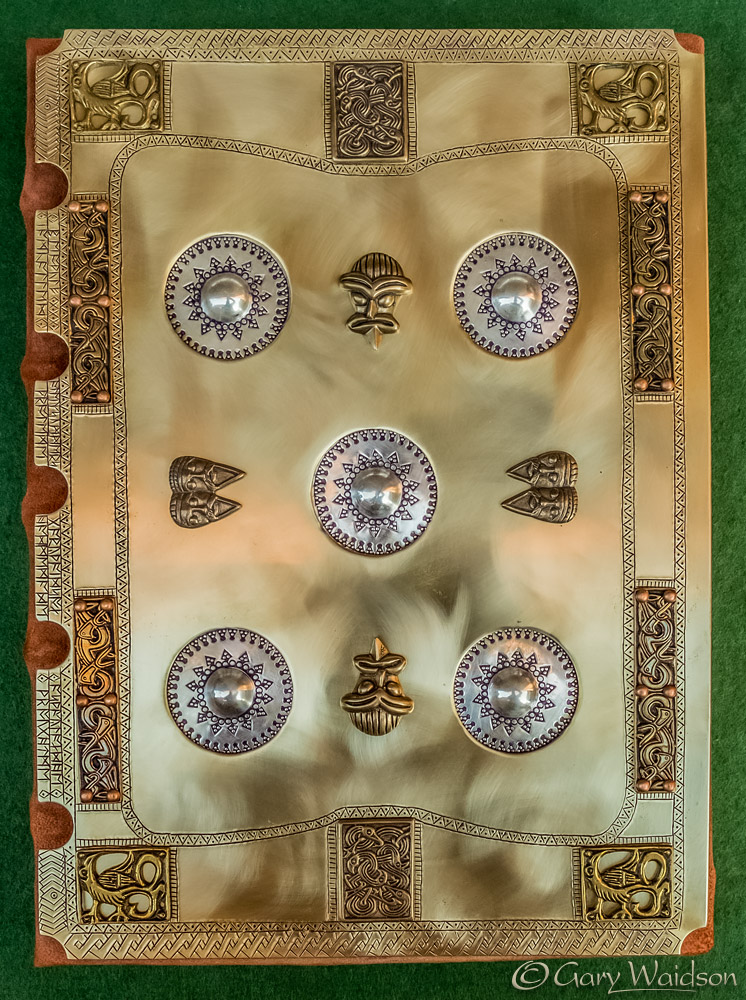 The next day I filled the top  and bottom margins with a square knotwork and inscribed it with Anglo  Saxon Runes, near the spine reading:

Beowulf / I am called

Gary Waidson / had me made

As Wayland / he wrought me 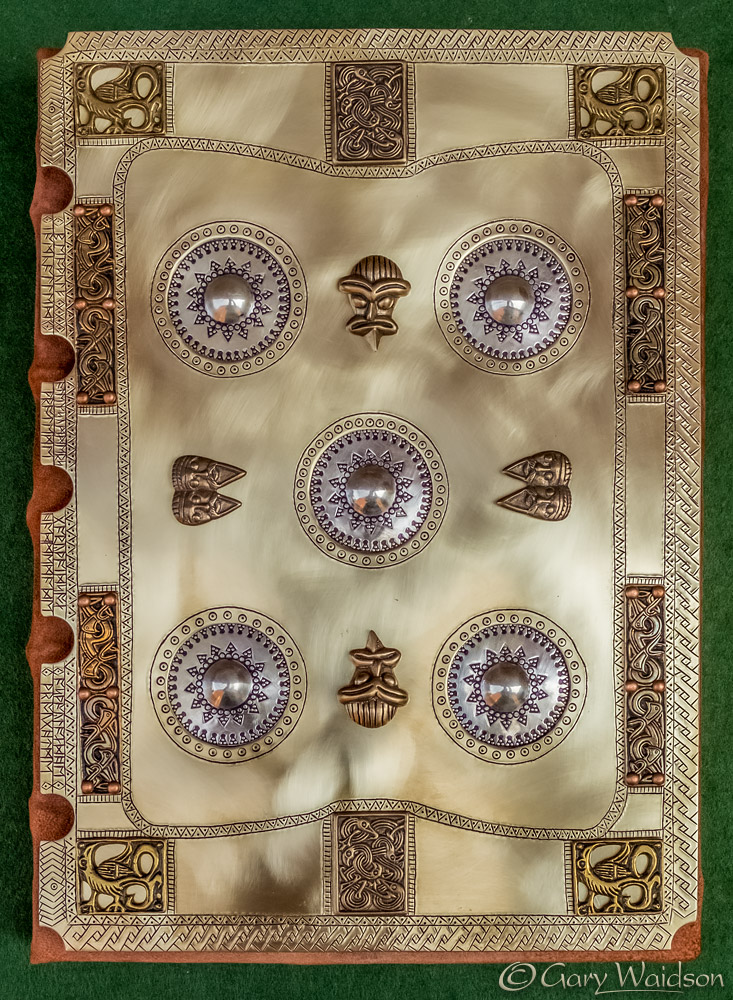 After a days break to do other  things, I completed the right hand margin and bordered the intaglios to marry them in better with the plate.

This may be  as much as I get done for a while, I need to plan the next parts  carefully and I want to save some work for my next living history  presentation which may well be Heysham, a year from now. 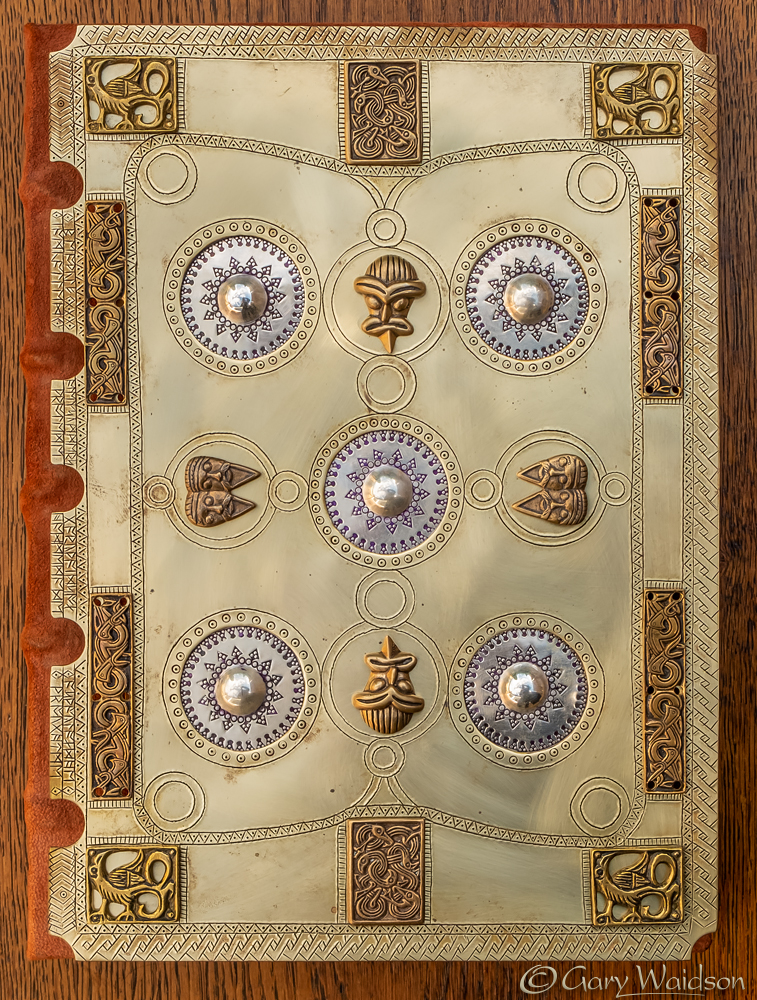 With Britain now in the grip of the Corona Virus the schools have all closed, probably for the rest of the academic year.

It does give me some time to catch up on a few of the projects I have had on the back boiler for a while though.

The first to be completed was the Hrafn Casket and now this is sitting on my bench again.

The picture  above shows the stage it was at after working on it at the last Heysham  Viking Festival. With the summer looking so uncertain now, I want to  progress it a bit in the workshop now. 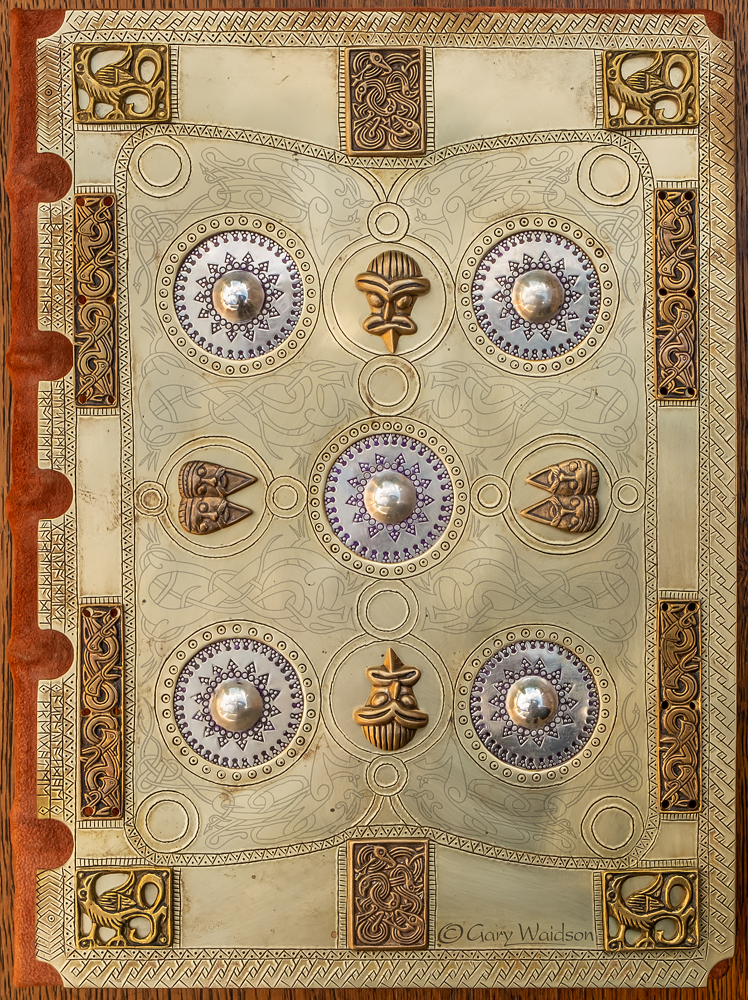 This is the design work that is  going to fill the main panels. A mixture of dragons, nicors and serpents which are all mentioned in the text.

The job now is to scribe the lines onto the plate before chasing them. That should keep me busy for a while. 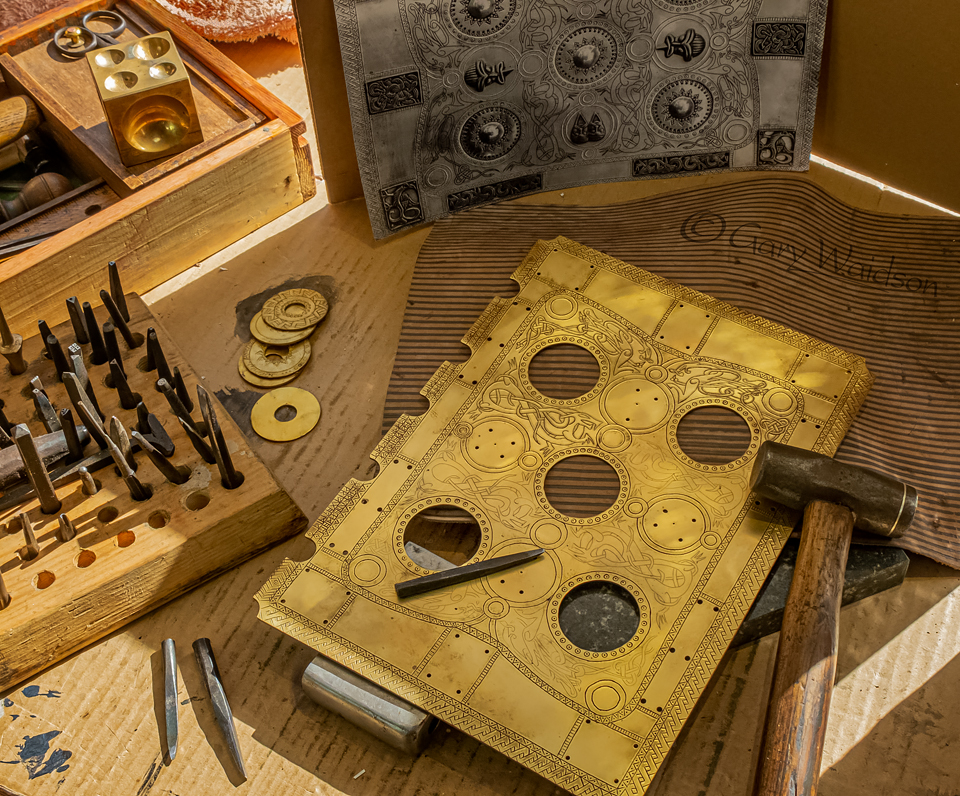 In case you were interested in the process here is a picture of my bench, with work in progress. You can see that three sections of the panel have been chased and there are five remaining sections which are just lightly scribed onto the surface.

I usually do this kind of work as demonstrations on living history displays so the bench is a bit  different but the tools are essentially the same.

Most of the work is done with three small chisels, each half the length of the next one. The hammer on the right applies a gentle tap and you move the chisel along the  line.

It is simple enough but does require careful attention. You cannot rub out a mistake here. 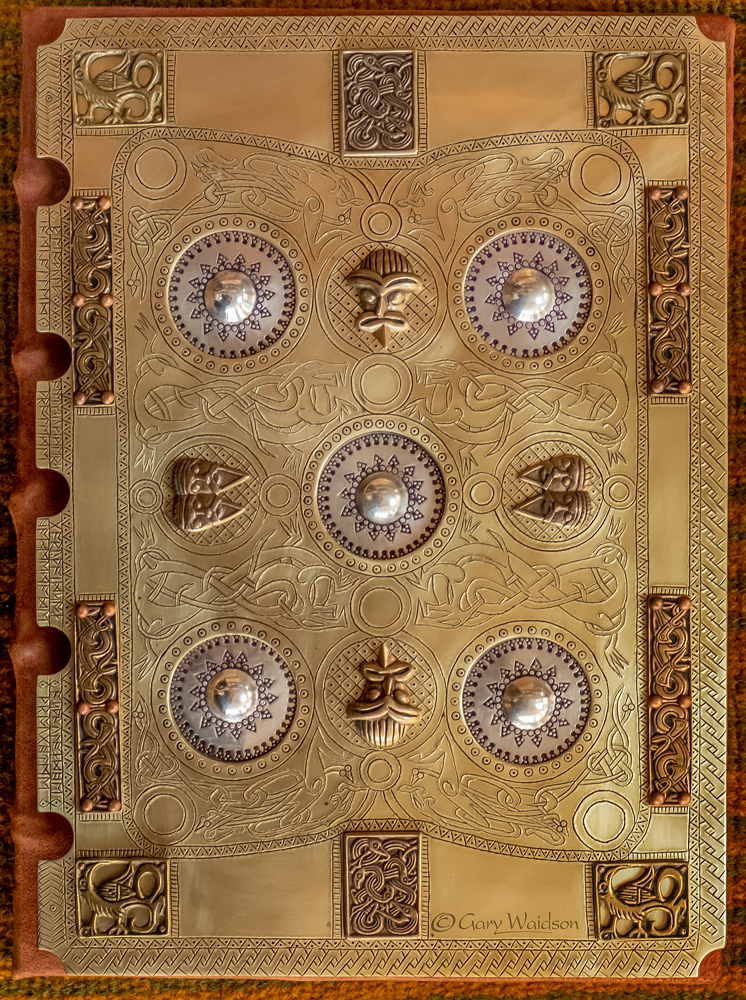 This is the main panel completed then.

I’ve just got the minor panels around the edge to fill in now. 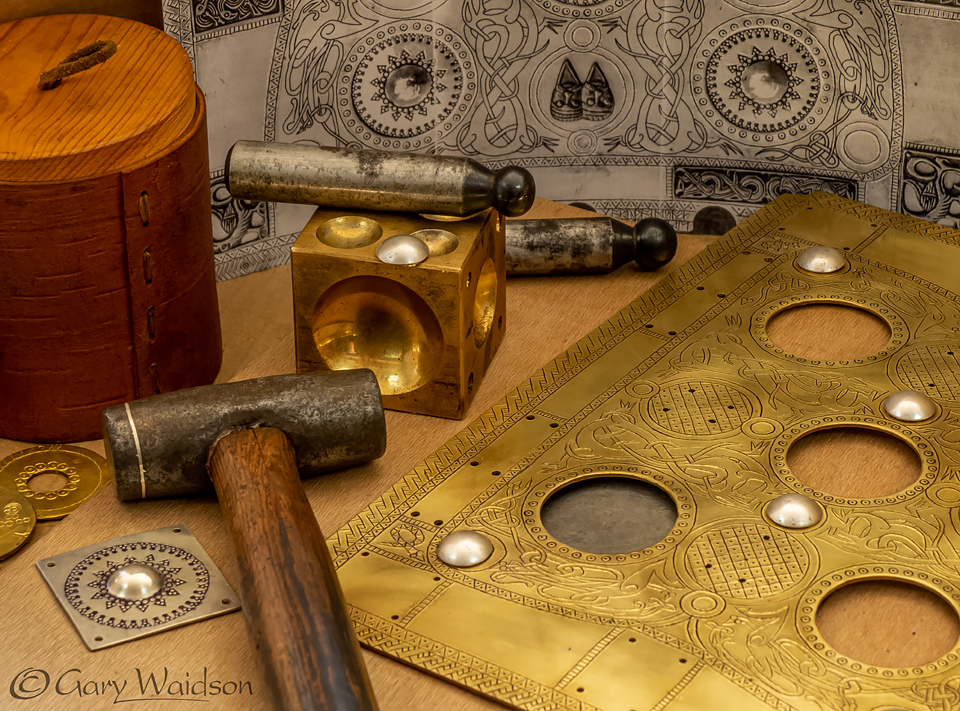 Here you can see I am using the cubic dapping block to make the silver rivet heads that will be used to attach the cover to the book when it is finished.

I also used it to dome the boss on the plate you can see on the left of the hammer.

I have been thinking for a while about how to transport and store the Codex. It needs to be looked after and throwing it in and out of chests and boxes will inevitably lead to damage and decline.

I decided to combine that thought with another project idea that has been rattling around in the back of my mind. Making a reliquary.

I had some oak lying around in the workshop that is just right for the carcass and I went for a simple construction method using pinned tabs that was widely used in the early medieval period.

The top section will lift off to reveal the Beowulf Codex

When the Codex is removed it reveals compartments below that I can store and transport a few other little treasures like the Whitby Brooch that I made a while back.

I haven’t decided on the decoration I will add to the outside of the box yet. It will probably be a combination of carving and metalwork but this will be my next project for living history demonstrations.

I’ve added a few edge straps and a coat or two of oil to give it a more finished look.

There is still a lot more to do but it makes it into a usable box for the time being. 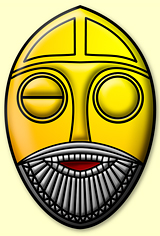